Webbdagarna was organized in Stockholm, we could see excited exhibitors, sponsors and partners. They did everyting in their powers to successfully capture the visitors attention. How well did they succeed? What insights did we get to next year’s exhibition?

Tobii Glasses is the latest addition to our toolbox of Conversionista, a tool for User testing that is used to messure where the user is looking and how they respond (etc navigating to and around the showcases at Webbdagarna).

We were attending as organizers for the conversion track of the conference and of course took this golden opportunity to preform tests with our glasses. How should YOUR showcase look to ATTRACT and ENGAGE visitors. Finally, CONVERT them?

The following three lessons are the results of the analysis from recordings of visitor eye tracking data.

More info about Tobii Glasses can be found after the three learnings.

1. Interaction is worth gold!

A few things have more than one single second of attention when we’re moving around on the exhibition floor. However, as illustrated in the film, it’s very different when we actually try to use something.

Utilization Hypothesis: Make sure to offer things that visitors want to interact with at your showcase, such as the ability to quenching their thirst or as a baseline the classic candybowl. And be sure to communicate what you want in close proximity to this, at least with your logo and “functional tagline”. 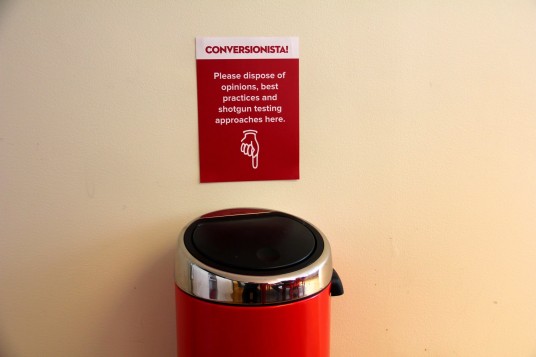 How we gave a lesson to the people who threw garbage

– but we are poor at utilizing it.

All test persons had more than half of their fixations on other visitors or exhibitors. Especially if the persons in question stands out from the crowd for some reason. Despite this, it was only the organizer who drew advantage of this fact.

Great visual prominence and clear call to action from IDG

Improvment Hypothesis: Here is how we can improve ourselves for next time, our dungarees stod out in a crowd, but we don’t have any specific elements on our outfit to take advantage of this without. Soley relying on that they would be curious enough to go to our booth. 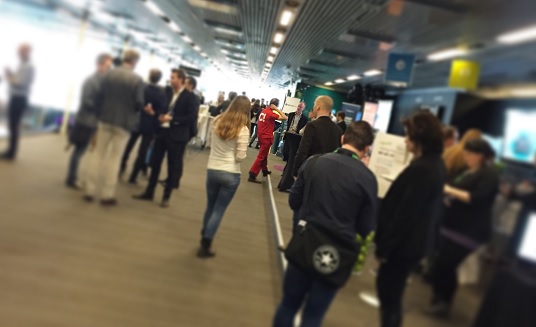 Our visual appearance was good, but our message could have been more optimized

Our reptilian brain reacts directly to the moving images, but as the case with moving banners on a website the logical part of our brain dissmisses the item almost as quickly if it does not capture our attention. In our Tobii Glasses data you see how practically all moving images on screens gets a brief look and then end up getting dismissed.

Closest on hand to overcome this is the beginning of the classic A.I.D.A. model: You first have to capture the attention and then have a chance to build interest.

Hypothesis Analysis: So how did we create our slide show? We take a slide as an example, “Conversion is like sex in high school” as shameful copywriters on the tabloids have known for a long time, there are shortcuts to catching people’s fleeting look, here we benefit from the most well-known of them. 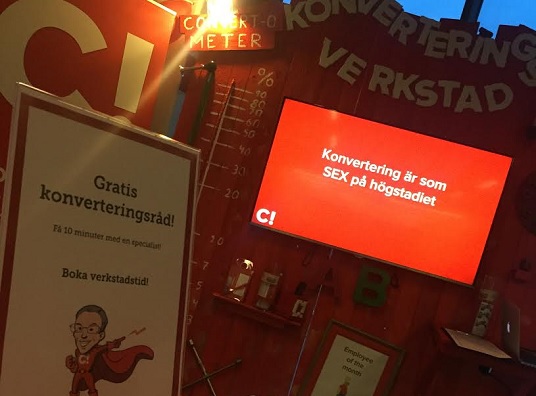 The meaning reference to high school itself leaves the reader like a question mark, which is something we were trying to take advantage of to build interest. In the screen we had one sentence moving in a relatively small font size; “Everyone talks about it, but few have done it.”

In order to comfortably read the text, you have to approach the booth, so the slide takes a calculated risk when attracting visitors. But those who approach and are reading the text may feel a bit smarter since they will understand the metaphor, and it also communicates that C! is familiar with and understands a problem that is common out there among businesses.

We can see that many exhibitors generally put much energy (or more precicely money) on things that nobody sees or interacts with. A classic mistake: two roll-ups with the company’s values (which incidentally seldom distinguishes itself from adjacent companies’ core values). By testing and understanding how visitors navigates, scans and stroll around the stands, we now know how to continue optimizing our stand at the next exhibition.

I hope you learnt something from our learnings!

Tobii Glasses – What is that?

Tobii Glasses records what the user sees and hears, and more specifically what he or she is focusing on, providing more opportunities for User testing. In general, it’s a better tool than traditional eye tracking when testing on mobile devices, because other solutions leads to unnatural user positioning 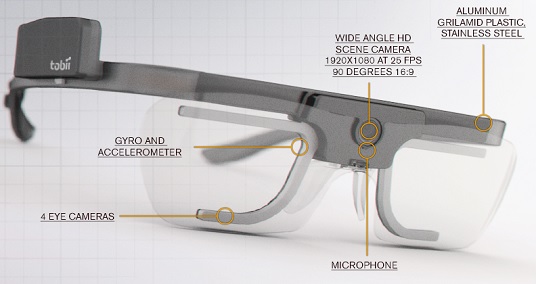 During Webbdagarna a lot of interaction takes place outside of traditional, digital web pages, or at least in an interaction between mobile devices, company websites and the actual exhibition hall. To be able to record and analyze the user experience of a visitor, Tobii’s eye-tracking glasses probably were the most appropriate tool.

What lessons have you from stands at events 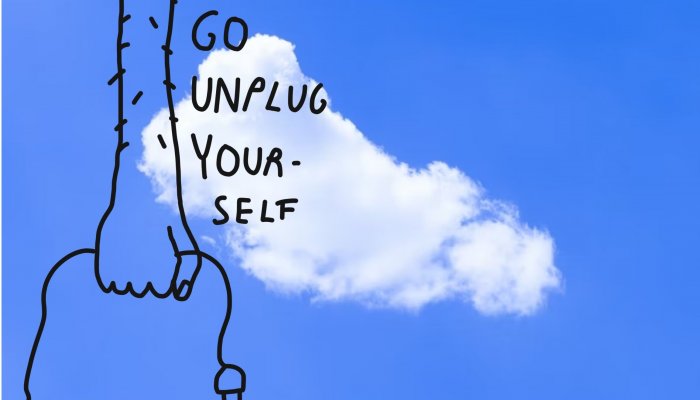 Unfocused? Focus on this! 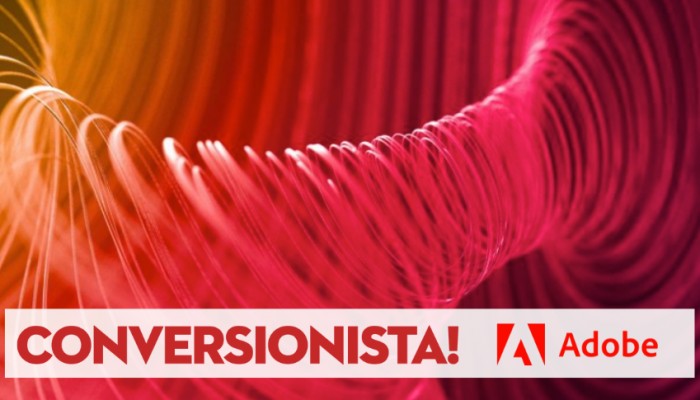 Could Adobe Analytics be a solution for life after UA?! 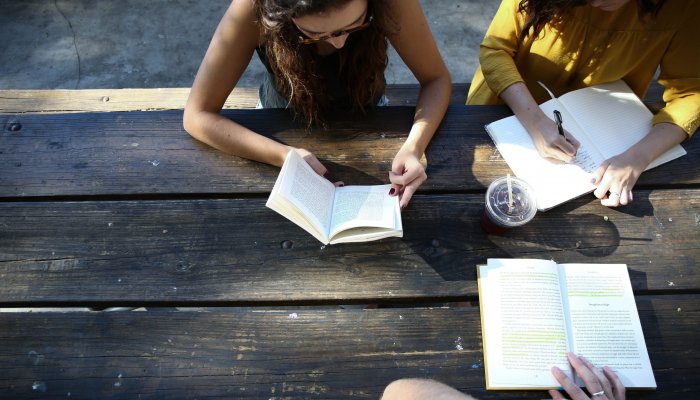